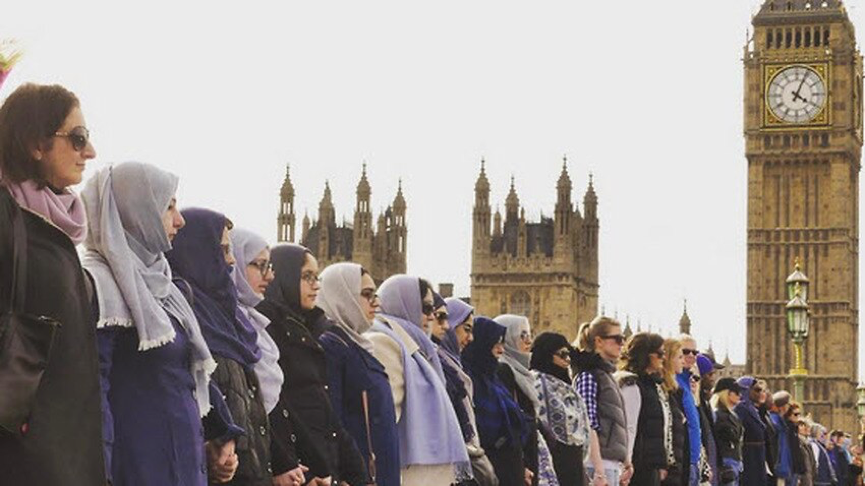 As Big Ben chimed four times on Sunday afternoon an unusual stillness fell over Westminster Bridge. Women – many of them wearing blue for peace – lined up along the bridge linking hands, and bowed their heads in silence.

For five minutes they held a still but powerful vigil in the shadow of the Palace of Westminster, the scene of such horror days ago. Remembering the four victims who died in the attack by Khalid Masood, women, brought together by organisers of the Women’s March, linked hands as a sign of solidarity and bowed their heads in respect.

For five minutes, tourists watched and slowed their steps – some simply curious, others inspired by the low-key action to join the line and pay their own respects.

The women – nearly a hundred strong – stood quietly, as a bagpipe played nearby. And when the short moment was over many just went on their way, while others stayed to catch up with old friends or make new ones.

It was a powerful moment which typified the unity of London in the wake of Wednesday’s terrorist attack, said the Rev Anna Macham, of St Philips, Camberwell. “It was so quiet and impromptu; just for a moment everyone was still,” she said. “It was very emotional.” Macham decided to attend after being told of it by a Muslim friend.

“I was so shocked by events this week and I wanted to stand alongside my Muslim sisters and show that what unites us is greater than what divides us.”

Kerena Sheath, 25, said there was s quiet defiance on the bridge.

“That man wanted to divide us, so by joining hands we are literally doing the opposite of what he wanted. This is London and you are not going to change us,” she said. “It was something beautiful to come out of something so hideous.”

That defiance could be seen again on the railings of Westminster where the terrorist’s car crashed to a stop. Among the flowers and tributes is a sign which says:

“We will never be beaten! London stands united and shall never live in fear. We are one city never divided by acts of hatred. United together!”

“We are not afraid. London stands united.”

Akeela Ahmed, an activist and campaigner who helped organise the gathering, said the action was a step towards “reclaiming” the bridge from the act of terrorism.

“It’s important that we say terror will not defeat and divide us and pay respects to those that died,” she said. “Keith Palmer is a hero and we are marking our respect for him and all the emergency services who protect us.”

Julie Siddiqi, a women’s activist and the former executive director of the Islamic Society of Britain, who helped organise the vigil, said: “The reaction of this country since Wednesday has been incredible. People have rejected hate and division.

“It sends a positive message that we need to reach out more, not less. What happened on Wednesday is terrible and tragic, but we will not let it define our relations – we can rise above that.”

Meanwhile, hundreds of Muslims throughout the UK carried out community activities, from litter picking to visiting hospitals and making food packages, to mark Sadaqa Day, which was first organised in 2015.

“I think people feel more driven and motivated than ever before this year,” she said. “For young Muslims, it’s a way of taking part in a positive actions to show they are part of UK communities and they will not be defined by these terrible actions. They are nothing to do with us, it is not part of our faith, so our work today is even more important than ever.”

The Women’s March, part of a movement that saw up to 2 million people march on 21 January after Donald Trump’s inauguration, did not publicise the #WeStandTogether action on social media. Organisers wanted it to be “a simple but powerful” symbol that the UK would not be divided by acts of terror, said spokeswoman Emma McNally.

Women who signed up online for the Women’s March were sent an email saying:

“In the wake of the Westminster attack, we invite you to join us for a women’s action of solidarity. It is important that we come together at this time when tensions intensify in our communities.”

But participants were asked to share the invitation only with those who might want to come, using private channels such as email and closed WhatsApp groups, in order to limit numbers.

“The image of women coming together from different communities and holding hands has significant symbolic power, particularly in the online world where so much xenophobic and racist language is shared,”

“This is a simple statement of women coming together and standing together, reclaiming Westminster Bridge as an expression of solidarity in London and across the UK.”